The draft Local Development Plan Review (LDP) has been published and the 80 page document can be read here: ldp draft ­­­­­­ . It also comes with two appendices, one which shows concept master plans: ldp appendix master plans , the other what is termed ‘Amber Sites’ which officers would like to know your views on: ldp appendix amber sites .

What does this mean for Cheswick Green?

The 2016 Draft Plan, which went out for consultation, saw land off Dog Kennel Lane (inside Blythe ward and Cheswick Green Parish Boundary) and across what is known as the TRW site) included as a preferred development site. The proposal here was for 850 homes and the objective was to develop a parcel of land on Light Hall Farm to tie in with land on TRW site (which is within Shirley South ward).

The extent of the 2016 proposals can be seen here, together with a description of the infrastructure requirements: 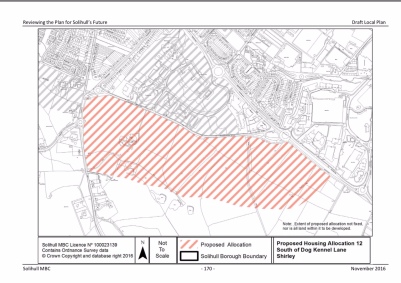 The present proposal is different to the 2016 draft plan in that it now includes other parcels of land, to include land leading to the rear of homes on Creynolds Lane and joining the Stratford Road at the roundabout with Monkspath Hall Road. There is now an expectation the site will deliver 1000 new homes. The master plan map can be seen here:

Fellow ward Councillor James Butler and myself feel this too much and we will resist this on several grounds.

The council’s development officers want to hear views about the proposals in the LDP. You can have your say via this link: http://solihull.jdi-consult.net/localplan/

Please do not think everything is done and dusted. As we have seen, there has already been a reduction in numbers in Dickens Heath and proves responses in the previous consultation were listened to (in part).

As well as making our own formal representations, which we will share publicly, Councillor James Butler and I have launched an online petition calling for Allocation 12 to be removed from the LDP to be submitted to the planning inspector. The rationale for opposing the site is as indicated above. Please help us in making our objections being more effective by putting your name to the online petition, which can be accessed here:

The consultation will run until Summer of this year and a what is called a Submission Draft Document will be submitted to the Planning Inspectorate, who will appoint an Inspector who will hold an Examination in Public (essentially a length public inquiry) where interest parties (that includes us all) can contribute. This is not likely to take place until next Winter 2019/20 with an anticipated adoption of a final LDP in Spring/Summer 2020.Please do not hesitate to contact either of us.