Following on from the previous post (dated 24 April) I have been in contact with Solihull Council’s environment officers who have reported back:

‘The incident was reported to the Environment Agency on Friday . I have just spoken to a representative from the Agency who has inspected the stream & lake. His opinion is that the pollution may have   originated from  one of the numerous culverts that feed off the industrial estates into the stream , due to the relative “small “ amount of pollution he has been unable to determine the exact origin of the pollution.

On his inspection he noted isolated pockets of residue on the stream bank . He feels these will soon disperse and will not have any adverse effects on the stream course or lake.

SMBC officers will continue to monitor the area.’ 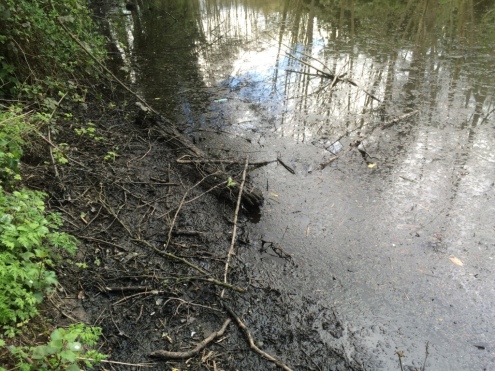 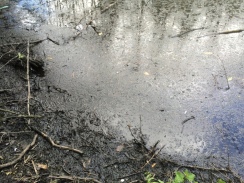 Further to this I again contacted the officer seeking answers to the questions about the nature of the pollution and risks posed. Whilst typing this report I was I contacted and informed the Environment Agency (EA) are confident the contamination is an oily material that poses little risk and will disperse. Our council officer is meting with the EA officer on site on Tuesday next week to undertake a full site visit. In the meantime the council have asked Amey, our environmental contractors, to clear some of the residue as soon as possible with a larger clean-up to be undertaken following next weeks inspection.

One extra video to show. This was taken yesterday in an area of the lake to the opposite side of the stream (near Lakeside Drive). As well as the video there are a few still photographs.