As a long standing resident of Monkspath, moving here in 1984, I was alarmed to notice the large buildings appear from the Highlands Road area when walking my dog on the parkland in March this year. I had always known this area was intended for commercial/business use but the size of these buildings surprised me. Shortly afterwards I was contacted by two residents of Lakeside Drive, Terry Prince and Jim Weaver, who alerted me to the planning application before Solihull’s Planning Committee in June (2014/667 ). This was an application by IM Properties Development Limited to obtain formal planning permission for one of the plots, but even more alarmingly allow B2 (General industrial use) see link: http://ww2.solihull.gov.uk/planning_new/dc/ViewApp.asp – enter 2014/667) 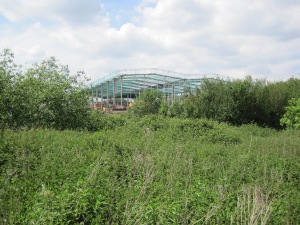 The location of the site is Monkspath Hall Road, and is identified as Solihull Business Park. The site is within Shirley South ward and not in Blythe ward (the hedgerow between the plots and the park is the ward boundary). This is important to note because it was one of the reasons opportunities to urge changes to the design and impact were not made at an earlier stage – especially as the main decisions were made in 2009 and 2010.

Planning applications 2009/1816 and 2010/2032 can be found via the councils web portal via this link: http://www.solihull.gov.uk/Resident/Planning/searchplanningapplications . Just enter the planning number for the original application documents. The decisions to allow B2 and B8 (warehousing) were confirmed in 2011. A further application, 2013/1525, sought confirmation of the decisions and permission to commence earthworks and site preparation works . This report can be found via this link:  131525MONKSPATHHALLROAD  This application went before the planning committee in October 2013, where I had just begun a short tenure as its vice chair! The report is quite explicit in its reading, explaining when decisions were made. It was therefore evident that any refusal to grant permission would be contrary to the councils own decisions and be subject of challenge at an appeal to the planning inspector. It was also the case that no representations were made to the planning department/planning committee in respect of this application and report to the committee, either by residents or ward councillors (Shirley South or Blythe ward). I have researched the 2010 and 2013 planning applications to find some 100+ neighbour letters were sent to addresses in Monkspath informing residents of these applications. I will explain more about this later and what I desire of the council in similar circumstances.

Most of the above information really came to light following the latest application by IM Properties, 2014/667. This application , which identified V Installations as the intended owner of the new premises, was investigated by Terry Prince and Jim Weaver and brought to my attention. You may recall it was then things stepped up somewhat, with Jim and Terry gathering names for a petition which I presented to the council. The application then went to planning committee in June, with Terry addressing the committee; it was here I also addressed committee and showed the video I took of the V Installations premises in Bromsgrove. The report to committee is posted here:  2014667 – Report by the Head of Development Management . The matter was deferred for further reports and went before the same planning committee last week; 6 August.

There were two main issues for me. One was the fear of noise from the plot to be owned by V Installations, the other was the screening of the two plots facing the parkland. This is what I based my objections to the original application. It was my view that, because  of the previous decisions the permission for B2 use would be granted and that mitigation of noise and the control and management of it was essential. So was the need for measures to address the screening of these buildings.

In respect of the latter comment, the objections raised at the June meeting were met with an offer to address some of the concerns within a letter from Turley, who act for IM Properties (please see attached report ‘additional information’ :  additional_information ). In this report measures to reduce the impact of noise were identified and the extra landscaping screening provided, with several 7m tall Alder trees to be planted. This was confirmed when Jim Weaver and I attended to meet with the managers of V Installations at their premises in Bromsgrove. The offer was made to all six councillors, I alone accepted and they allowed me take Jim with me.

It became apparent that my angst was not with V Installations but with the previous decision makers. V Installations desire to be good neighbours and have adopted several measures to reduce noise from their premises. Their core working hours will be day time (8am to 6pm but not limited to those hours entirely). They identified new machinery they were purchasing to bring into the new premises, including extraction systems. I came to the conclusion that one issue that needed to be resolved was that IF noise was heard from the direction of the business park, who’s noise was it? The managers at V Installations were quite adamant that residents in the Lakeside Drive area and Thornton Road would not be hearing heavy goods vehicles on their premises late at night and that all fork lift trucks being used outside of the premises would not have reversing alarms. It is fair to say that both Jim and I were pleased with the demeanour of the managers, who agreed to Jim’s request that if there were issues identified by residents, they would work with the owners of the other plots on the site to address them. I sought this in my submission to the planning committee.

I was not able to address the planning committee in person last week because I was chairing a meeting looking at the restructuring of the boroughs highways department. I did however write a statement which was read to out to members by the chair of the planning committee. I also know Simon Burton spoke on behalf of residents of Lakeside Drive. My written submission is posted here; V Installations application ­­­­­­­­­­­­­­­­­­­­­­­­­­­­­ . My submission focussed on noise mitigation and management. I have still to confirm what measures the council will adopt to monitor noise from all three plots on the site, not just the one subject of this application. I also sought the retention of Section 106 monies (what developers pay to address impact issues) so that additional screening can be undertaken at a later stage if the measures adopted by IM Properties are not proven to be sufficient.

The application was approved by the committee, who I know were concerned. One member did ask at the June meeting ‘Are we being asked to rectify a mistake in an earlier decision’? I do feel that is correct but we were so far down the line that mitigation was the only outcome that could address concerns.

I have also stressed the learning the council can take from this exercise, where no resident or local councillor (or representative) objected to two applications (in 2010 and 2013). I suspect residents did not understand the consequences of B2 and B8 when letters dropped onto their doormats – and neither should they if the letter was drafted in technical terms. It is vital all future letters sent out, to anywhere in the borough, are drafted in such a manner that the normal resident , even local councillors, can understand

As someone who walks their dog over this part of the park almost daily I will monitor noise and ensure screening is suitable. The 7m tall Alder trees will help; these grow at 1-2 m per year. I want the whole area to be screened from the parkland as the Monkspath Business Park is from the other end of the park. I will ensure this is so.